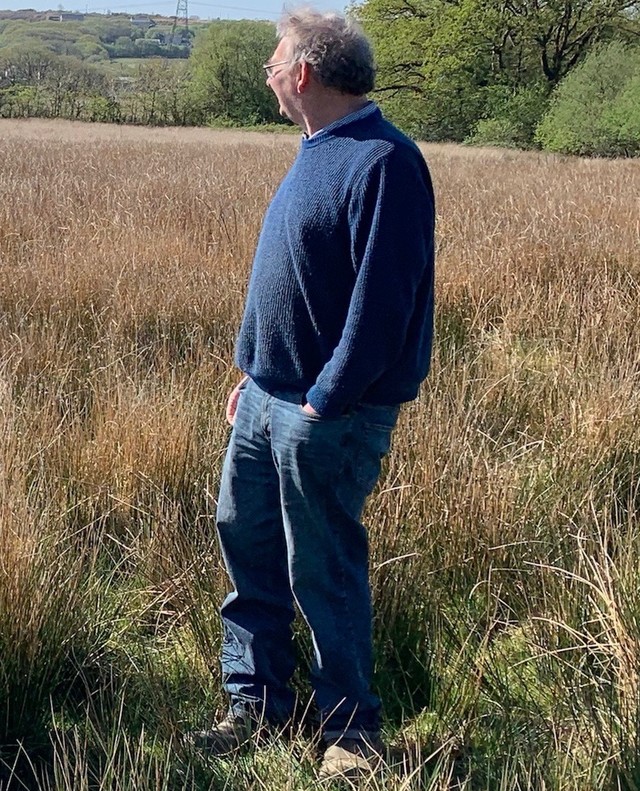 David Gwynne Popham, known as Gwynne, was born in Church Village hospital. His first home was Holly Cottage, Groesfaen. He moved, when he was 2 years old, with his mother Gwyneth and father Jeff to Glenholme, Pontsarn Road, Peterson Super Ely.

Gwynne grew up at Glenholme and only left there to marry. He attended Pendoylan Primary School and enjoyed many happy times growing up on Pontsarn Lane, playing with the other children living along “the lane”.

The next-door neighbours the Jones’ were very kind to all the Popham family and Gwynne enjoyed helping Bob Jones on the harvest from a very young age. Gwynne became life long friends with another neighbour, Craig Otley, they went through school together, went to cubs together and stayed friends their entire lives, and were still regularly meeting up for Breakfast in Cowbridge.

Glenholme was a smallholding run by Gwynne’s father Jeff and mother Gwyneth, the holdings main enterprise was a pig farm, Gwynne never liked the pigs (or so he said ?) but was always willing to help his Dad repairing anything mechanical, Jeff was a skilled motor mechanic who worked in a garage that amongst it’s many customers serviced a number of farms and was prepared to have a go at repairing anything.

It is fair to say Gwynne didn’t enjoy the academic side of school and was never happier than if he could convince his mother he should have a day off to go to a farm Sale. One benefit of the new facilities at Radyr was the excellent metalwork and woodwork departments it had, where Gwynne enjoyed learning all sorts of practice skills.

Gwynne, as a young man was extremely physically fit, he had a Saturday job for years helping the local woodcutter Sid, the heavy manual work enhanced his fitness. Gwynne played Rugby for Radyr School and went on tour to Canada where they played a number of games in the Toronto area.

In his early teens, Gwynne decided school wasn’t for him and persuaded his parents to let him leave school at Easter, before sitting his final exams, to take up an apprenticeship with Trivett Brothers. Gwynne bought himself a Garelli moped to go back and fore to work. There weren’t many weekends when he didn’t need to take this bike apart for some reason.

Gwynne did an apprenticeship with Trivetts and attended Barry college on day release, he stayed working for Trivett Brothers for many years after finishing his apprenticeship and developed an expertise for repairing Bobcats (skid steer loaders). There really wasn’t much worth knowing about a bobcat that Gwynne didn’t know and even recently Gwynne would get an occasional phone call asking his advice on how to repair a bobcat that had broken down.

Gwynne progressed to become a valued service engineer at Trivetts, travelling the width and depth of the country repairing sick or poorly bobcats, he was so proud to have his first service van, it was a Bedford CF ( not the most comfortable drive by modern standards) Gwynne would happily drive anywhere in the country especially if the Bobcat was on a farm and it was urgently needed to feed livestock.

Gwynne Married and had two sons, David and Matthew, he lived for some time in Pontyclun before securing the holding at Tyn y Plancau, Pendoylan, where he brought up his family. Gwynne left Trivetts to join Cliff at Boarder Services (a Bobcat main Dealer) where again he worked for many years. He related a story when working for Cliff of taking a new machine to demonstrate to an army major only to find the machine wouldn’t start (Gwynne was devastated ! ) the army major replied: “don’t worry this happens all the time with the tanks!”

Gwynne was always happy to help anyone whether it be driving to Devon to fix a bobcat or moving boxes and pallets for Operation Christmas Child, he was very proud of his 2 sons and valued being able to raise them at Tyn y Plancau.

Gwynne spent the last 20 years of his working life, working with his brother Martyn, anyone who knows them both knows they had quite different characters, it is possibly why they antagonised each other regularly but seldom really fell out.

Three years ago Gwynne decided to take it a bit easier and work part-time, he was never happier than being able to be left on his own hedge cutting or mowing, he was working on the farm only 2 days before he died.

Gwynne loved rural life, a bit of locals news and a cup of coffee with his good friend John Griffiths. His bible was the Farmers Weekly. He didn’t really see merit on foreign holidays or fine food, but he did love a Chinese or a Curry night with the farmers at Dinas Powys.

Gwynne also enjoyed helping out at the Vale show, at Operation Christmas Child and manning the car park for a Charity Ball and he quietly supported the Samaritans.

He also had a sweet tooth (that he should not have had) easily proven by jumping in a tractor after he had been driving it. It is possibly ironic that Gwynne who spent his life repairing hydraulic pumps (the beating heart of a bobcat) died very suddenly of a massive heart attack, the one pump he could not fix!

On the day he died Gwynne’s reliable Bobcat failed to start and his cherished 8-year-old “pet pig” died the next day, both these events would have troubled Gwynne because that was his character.

To sum up, Gwynne would have preferred to be seen as a torchlight helping to see and solve a problem for others, rather than be in the central limelight, he didn’t like a fuss but he did like a jelly baby!